Joyce Dahmer and the UFO 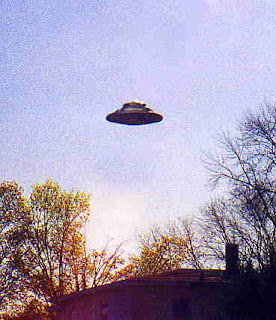 This is a bizarre incident– even by Dahmer standards!– that I would have included in the book, but I was unable to pin down the details. It happened some time in the early 1970s. I'm not sure of the exact year.

The Dahmers moved into their house in Bath, Ohio, in 1970. They kept to themselves more than others in the neighborhood. Jeff, then in elementary school, was a strange boy with few friends. And his mom, Joyce, was viewed suspiciously by the neighbors as a bit of an emotional wreck. Some recounted incidents where Joyce suddenly burst into tears and most recall her as odd and paranoid. What they didn't know at the time was that Joyce was battling severe clinical depression, so debilitating in fact that she was an invalid barely able to function at all. Even today, depression is neither understood or regarded with much sympathy, but in the Seventies, someone like Joyce was simply written off as "a nut," which is how one of the neighbors described her to me 30 years later.

Now, UFOs were all the rage in the Seventies. It was just after the peak of the Space Race and our national obsession with astronauts and beating the Soviets to the Moon, and a now-bored populace had moved to fanciful thoughts of aliens and visiting spacecraft. This would reach its pinnacle later in the decade with Close Encounters of the Third Kind, but at this point it was the stuff of supermarket tabloids and sci-fi digests.

One evening, a neighbor kid remembers hearing someone shouting excitedly outside. In a quiet neighborhood like this, any yelling would raise an alarm. He peered out his window and saw Joyce running frantically up Bath Road, heavily wooded on both sides, but clear directly above the roadway, pointing excitedly at the sky and yelling over and over that there was a UFO! She ran up the street, pointing and shouting, until she crested the hill and was out of sight and earshot.

Lionel Dahmer wrote of this incident, as well, but offered few details. He chased after Joyce when he realized she had bolted from the property, and caught up with her (presumably in his car). She was frantic, and made him drive all over the countryside for several hours while she searched the sky for the spacecraft. You can imagine what was going through poor Lionel's mind.

This was the worst period of Joyce's mental troubles, and she had two stints in the mental ward of Akron General in 1970. I'm not sure when exactly the UFO incident fits in the timeline, however. It was later reported that her UFO sighting received a small write up in the Akron Beacon Journal, but I was unable to locate the article. Without details or documentation, I didn't feel I could add it to the book, especially since it may well have occurred before I met Jeff and my tale begins.

It sounds like a humorous scene, but, of course, it was anything but. Not only was poor Joyce in such a state that she was seeing things, but this public display only cemented the family's rep as the oddballs in the neighborhood. Local wags talked about it for months after. To her credit, Joyce rallied and by the early Eighties was once again stable and functional, although her ten years of mental and emotional distress contributed mightily to the break up of the Dahmer marriage.
Posted by Derf Backderf at 6:27 AM

ABOUT MY FRIEND DAHMER

This the blog for the critically acclaimed, graphic novel MY FRIEND DAHMER by Derf Backderf. Published by Abrams Comicarts.
Buy the hardback or paperback at Amazon
Buy the ebook for Kindle, tablet or pad from Comixology HERE
Buy the iTunes ebook HERE
Buy the Nook ebook HERE

Derf Backderf
This is the blog for comix creator DERF BACKDERF, author of the graphic novels "Trashed", "Punk Rock & Trailer Parks" and the international bestseller "My Friend Dahmer."